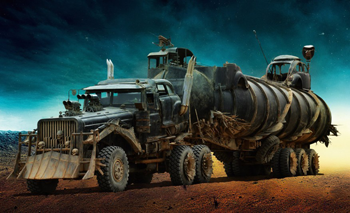 "You're looking at 2,000 horsepower of nitro-boosted war machine."
Advertisement:

When Testosterone Poisoning hits the road.

A Sister Trope to Cool Car, this is the kind where even four wheels isn't enough, you need the diesel fumes and huge smoking pipes and plenty of axles and... well, you have the big rig truck that tends to be a mainstay in action movies and the like. And driving in one of these things is quite ideal for Hard Truckin'.