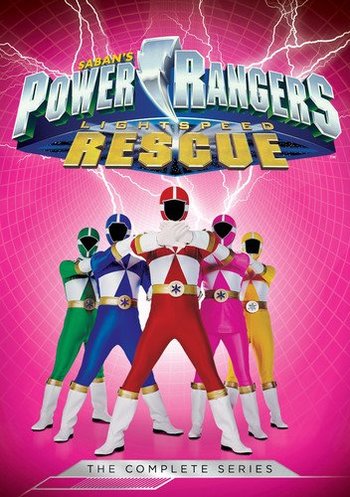 The eighth season of Power Rangers, successor series to Power Rangers Lost Galaxy, and adapted from Kyukyu Sentai GoGoV. It was the first Power Rangers series to be completely independent from its predecessor, and to drop the secret identity trope. Lightspeed Rescue was a government-sponsored agency, dedicated to protecting the city of Mariner Bay from the return of Queen Bansheera and her minions.

Captain Mitchell, accidentally made aware of the threat, assembles a team of rangers, including his eighteen-year-old daughter, Dana, a paramedic; Carter Grayson, a firefighter; Kelsey Winslow, extreme sports enthusiast; Joel Rawlings, stunt pilot; and Chad Lee, a whale trainer and martial artist. At first, the potential Rangers want nothing to do with it, but upon witnessing the threat with their own eyes, they embrace their position as civil servants.

It turns out that Mitchell was prepared for the arrival of the demons because he has had experience with them in the past...

Lightspeed is the first season to feature an entirely American-made ranger, the Titanium Ranger, as Go Go V did not have a Sixth Ranger. It also was a military-esque, government funded and organized team, with Secret Identities entirely non-existent.

Lightspeed is somewhat divisive among the fandom; some consider it to be one of the better seasons, while others consider it to be sub-par. Most people cite the villains and some of the acting as weak points, while the storyline and action sequences are often claimed to be the show's saving grace. The fact it was succeeded by what is considered by some to be the best season probably didn't help matters much. In general, this season is considered the weakest of the Judd Lynn era, although that claim has been challenged by Power Rangers Ninja Steel as of recent.