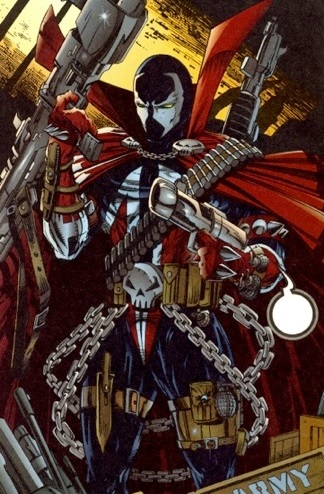 Hell hath no fury like More Dakka.
"And one of them has the greatest superpower of all: GUUUUUUNS!"
— 90s Kid, Atop the Fourth Wall
Advertisement:

No, not that kind of heat. Or that.

In short, this is when packing firearms is treated as a superpower.

For various reasons, Doesn't Like Guns is a common thing with comic book style superheroes and supervillains (whether it's ethics, style, or something else). While Proto-Superhero vigilantes like The Shadow or The Lone Ranger often went armed, the Golden Age supers who came after them typically relied upon their extraordinary abilities over firearms. Even before The Comics Code was written, it was rare to see superpowered heroes with guns. Then some heroes who broke this rule caught on, and soon more and more heroes and villains began using guns. This soon became closely associated with the '90s Anti-Hero, and therefore also fell out of favor when that trope did.

This doesn't have to be just projectile firearms. Lasers will do as long as they are used more like firearms than Ray Guns. Heck, even flamethrowers and bazookas can count. Bonus points if the character is also wearing a Badass Bandolier.

Note: To count, a character has to meet two requirements:

Being a Badass Normal can count, or if the character has superpowers (as long as they are either gun-related or don't make the gun use secondary). If they have superpowers, but either their powers aren't useful for combat or they simply prefer not to use their powers that often, they're said to fight like a normal.

Contrast with Doesn't Like Guns, Batman Grabs a Gun, Empowered Badass Normal (someone who normally would use guns, or some other prosaic weapon, suddenly gets superpowers).