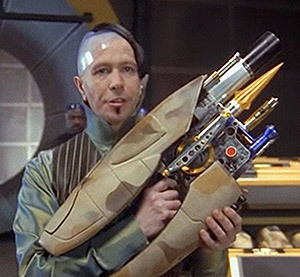 Simply put, it's a gun that can do a whole bunch of stuff depending on the situation. Like a Swiss Army knife, with just a flip of the wrist it can be a rocket launcher, shotgun, machine gun, grenade launcher, or chainsaw rocket catapult. This gun seems to be whatever you need, when you need it, just as long as it's some kind of projectile weapon. Don't even begin to mention the obvious design flaws, because this weapon is powered by Rule of Cool, with a little bit of Hyperspace Arsenal thrown in.

Subtrope of Swiss Army Weapon. Often also a BFG (hey, those extra guns are gonna take up space). Compare to Do-Anything Robot, for its even less realistic equivalent. The key difference between this trope and the Do-Anything Robot is that the Swiss Army Gun generally has some kind of limit or some set number of forms. Gun Accessories are a common method of creating such a weapon.