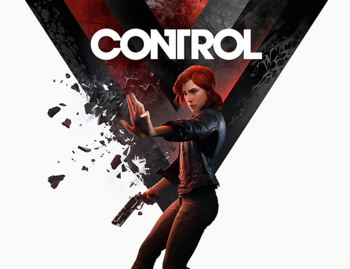 Discover a world unknown.
"Fair warning: This is going to be... weirder than usual."
— Jesse Faden

Control is a 2019 New Weird Action-Adventure video game created by Remedy Entertainment for PC, PlayStation 4, and Xbox One. It was released on August 27, 2019.

As a child in the town of Ordinary, Jesse Faden was caught up in a strange and terrifying event that shattered her world, took her brother Dylan away from her, and sent her on the run from the government. After seventeen years of fruitlessly searching for answers for what happened to her and Dylan, a mysterious presence from that event leads her to a concrete skyscraper in New York. There she discovers the Federal Bureau of Control, a clandestine government agency charged with suppressing knowledge of the supernatural — the very same group that took Dylan.

Unfortunately, her timing couldn't be worse.

The Bureau is under attack, its Director is dead, and most of its agents are either the same, missing or corrupted by the malevolent, otherworldly force that's invaded the building. Appointed the new Director by a strange entity called The Board, Jesse must fight back the "Hiss" as she delves deeper into the Bureau's strange headquarters and history.

If Jesse hopes to survive, find Dylan, and finally get some answers to her past, she'll need to do the one thing she never has ever been able to do. She'll need to take control, both of the Bureau and of her life…

The game has two major story DLCs designed to be handled after the main game is completed: The Foundation, which takes Jesse into the depths of The Oldest House, and AWE, which represents a new chapter for another much-loved Remedy game: Alan Wake.

An Ultimate Edition using cloud-based technology was announced for the Nintendo Switch on October 28th, 2020 for release on the same day.

No relation to the 2007 Ian Curtis biopic.