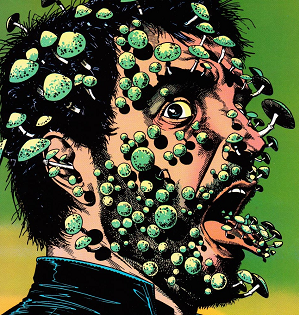 In The Cursed Earth, shrooms are on YOU.
"Mushrooms grow on dead things"
— Repeated Line, Supergod
Advertisement:

The Festering Fungus is a fictional lifeform usually based on a mold or a lichen, known for its rapid growth rate and destructive tendencies.

The effects of the fungus will vary. The Lighter and Softer versions will usually just cause structural damage to buildings, cars and trees, while the nastier versions start growing on people, resulting in all sorts of Body Horror. Ingesting the spores of this lifeform is to be avoided at all cost.

This type of lifeform tends to make for a good Monster of the Week. After all, it's usually nonsentient, so you can finish it off for good without feeling guilty about it. The protagonists will usually find a way to stop it by the end of the episode, often with the aid of some fantastical fungicide or by dropping the temperature so that it can't grow.

In a comedy series, expect it to have crawled out of someone's refrigerator. See also: Alien Kudzu, Fungus Humongous, The Virus. Mold-based variants may overlap with Blob Monster, Muck Monster, or Meat Moss. People infected with one of these may become Poisonous People and/or Mushroom Men. Often a Puppeteer Parasite.