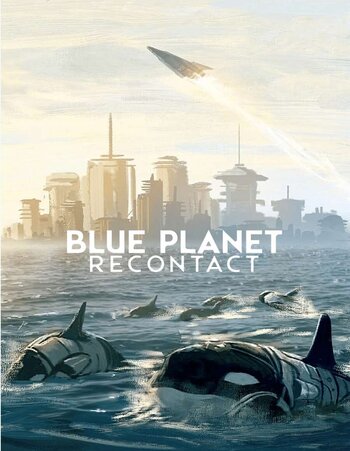 It’s that first moment I'll never forget. I’m no poet, but by God, I'll tell you, sliding into that water felt like coming home. No lie. It was as real as I'm sitting here talking to you. A kind of dreamy, half deja-vu. It lasted for maybe five minutes, maybe more, while that crystal blue water worked its way into every pore. I just hung there about two meters under, grinning like an idiot (you've probably seen that clip, too).
— Nathanial Lesear, describing the first time a human entered the waters of Poseidon
Advertisement:

Blue Planet is a science-fiction Tabletop RPG by Biohazard Games.

The year is 2199. Over a hundred years ago, astronomers found an unusual object beyond the orbit of Pluto. It turned out to be a stable wormhole leading to the Lambda Serpentis system, about 40 light-years away. The second planet in the system was a water world, teeming with life, which was named Poseidon.

A colony ship, the UNSS Cousteau, was sent in 2086, carrying genetically modified colonists designed to thrive on a water world: genetically redesigned amphibious humans, along with uplifted dolphins and orcas. More ships were planned to follow; however, in 2090, a genetically modified plant virus called the Blight escaped into the wild and devastated Earth's food supplies.

On Poseidon, when the resupply missions failed to arrive, the colonists adjusted to life with an ever-dwindling supply of industrial technology, and encountered a seemingly intelligent species they named "nereids" ("aborigines" in 1st and 2nd editions.) On Earth, meanwhile, the Blight's body count climbed into the billions; nation-states disintegrated, and the Incorporate arose in their absence. International governmental authority was placed in the hands of the UN Global Ecology Organization, which ultimately annexed most of the UN's functions to itself.

The Blight was finally conquered after almost thirty years, having cut Earth's population by more than half. The GEO's official purpose was over, but Earth's surviving governments found that there was no way to rescind its authority; that could only be done by a two-thirds vote of the original United Nations members who authorized it... and over a third of those member states no longer existed. The recreated United Nations, the Independent nations who never accepted the GEO's authority, and many of the Incorporate are all attempting to challenge the GEO, which refuses to yield the authority it has been given.

In 2169, the UNSS Admiral Robert Perry recontacted the colonists of Poseidon, leading to regular resupply and contact runs through the wormhole. There was some interest by the GEO and the Incorporate states, but no major efforts at added colonization until the 2185 discovery of xenosilicates, a material that allows much easier modifications of biochemistry than ever believed possible. One of the first applications found was a retrovirus that stops the aging process, leading to a new name for xenosilicates — Longevity Ore, or Long John for short — and the biggest resource rush in human history.

The population of Poseidon, only 40,000 people when the Perry arrived, has reached two million, over 95% of them Earth-born arrivals from after Recontact. The GEO is trying desperately to maintain some sort of control. The Incorporate and wildcat miners see fabulous wealth awaiting them. Some natives are choosing to resist the newcomers, sometimes violently. And it seems that Poseidon itself might be on their side...

There have been four editions of Blue Planet in total, with a fifth upcoming:

Tropes found in Blue Planet include: