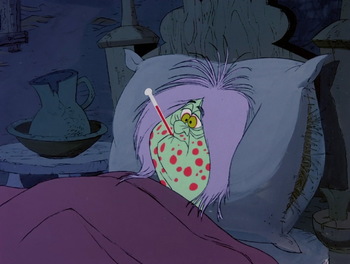 That's malignalitaloptereosis for you.
Advertisement:

A fictional disease that's characterised by having spots somewhere on the body. Commonly, the spots are all over the body but sometimes they might only appear on the face.

Somewhat Truth in Television: there's more than a handful of conditions and diseases in Real Life that make you appear spotty, such as chicken pox and measles, which are the basis of many of these diseases, and some children in both fiction and real life fake these diseases by painting spots on, but you can easily tell if someone is faking because these real diseases' spots look more like a skin rash than actual polka-dots.

Symptoms of the disease itself besides the spots may vary. Sometimes, the character gets lethargic and/or has other symptoms like sneezing and coughing as well as the spots, where in other times, the character has no other symptoms besides the spots, which may be inconveniently itchy but relatively harmless. Sometimes, the spots themselves appear all at once (often the character wakes up covered in spots) but other times the spots appear gradually and are brought to light by another character pointing them out. The spots are commonly red or pink, though comedies might have the spots appear in different colours or even be multicoloured. Regardless, these diseases are often infectious.

Cures also vary—sometimes, the cure is just plain old rest, regardless of whether or not the afflicted character is tired (which, understandably, is a bit annoying for them if they aren't), while other times, there might be a whole plot to Find the Cure!, which is something more exciting. Often, upon being cured, the spots either vanish all at once, or, especially in animation, they fall off or "pop" off one by one. Other times, the cure is simply getting rid of the spots.

Compare Sickness Equals Redness, which also makes it easy to tell that a character is sick.

Example of:
Soup Is Medicine