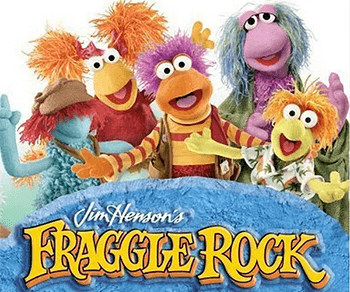 Let the music play, down in Fraggle Rock!note L - R: Boober, Red, Gobo, Mokey, Wembley
"The magic is always there, as long as we keep looking for it... "
— Uncle Travelling Matt
Advertisement:

Story goes that Jim Henson was taking a long and boring trip and mused aloud, "I'd like to make a TV show that brings about world peace."

The result? Fraggle Rock, produced for the CBC in Canada, and aired on HBO in the U.S. in 1983-87 and rerun several times since. The series depicts a colorful and fun world, but it's also a world with a relatively complex ecosystem. The different races of creatures are each connected through symbiosis, even though they don't realize it until the very end of the series. This was meant as an allegory of the human world, where each group is somewhat unaware of how interconnected and important they are to one another. Creating this allegorical world allowed the program to entertain and amuse while seriously exploring complex issues of prejudice, spirituality, personal identity, ecology and social conflict.

The series' triumph, by far, was being able to express all of this onscreen without being Anvilicious or insulting the intelligence of its young audience. By the second season, there wasn't an issue they wouldn't tackle. The writers refused to over-simplify any individual issue, and instead simply illustrated the consequences and inherent difficulties of different actions and relationships. Though the Fraggles do learn important lessons, they are rarely self-conscious about it.

And the best part? The series is a lot of fun, with wall-to-wall music and engaging characters in a fantastic, well-realized setting, making it a prime example of the kind of show you like as a kid, but "get" as an adult. It also contains some of the most astonishing and ingenious special effects ever devised for a Muppet series, thanks to a team led by Muppet veteran Faz Fazakas. HBO, understandably excited about having an exclusive on a new series from the creator of the most-watched TV series on the planet, paid the show's talent costs, allowing the CBC production team in Toronto to allocate more funds for production (using the increased budget typical of a variety show as opposed to a children's show), and it showed.

The ideals of friendship, being true to yourself and learning to love those incredibly different were the cornerstones of Henson's career, and he considered Fraggle Rock to be one of the purest and most successful expressions of that vision. Although Henson delegated most of the day-to-day responsibilities of the series' production, as he was focused on The Dark Crystal and then Labyrinth at the time, he had assembled a top-notch team of professionals in every department who knew how to bring his vision to life, and did with flying colors; in turn, many Henson fans have agreed that Fraggle Rock may be his masterpiece. Unlike Dark Crystal and Labyrinth, Fraggle Rock enjoyed near universal acclaim, well liked by both criticsnote (it was a CableACE award winner and even earned a commendation from the National Educational Association before it even premiered) and audiences.note Early Nielsen surveys showed Fraggle Rock on HBO with a 13.2% rating among kids, more than six times the channel's average, and that it was watched by more viewers 11 years old and younger than the much-ballyhooed HBO premiere of Star Wars. In Canada, where one didn't need a pay television subscription to watch the show, it was even more popular, winning ratings as high as 20%. The first LP soundtrack earned a Grammy nomination and charted in the UK Top 40 (as did the theme song). And while it didn't end war in general, it was dubbed into over a dozen languages and aired in over ninety nations globally, and was the first western series broadcast in the Soviet Union... four days before the Berlin Wall came down, no less!note Henson obviously knew that his show wasn't solely responsible for ending the Cold War, but he still jokingly took the circumstances as a compliment.

Meanwhile, a follow-up film has been in development since 2005 and has lapsed in and out of Development Hell since. Its most recent move forward was in spring 2015, where Joseph Gordon-Levitt signed on

to produce and star in the film. Given the two streaming reboots that have transpired since, the movie's status remains unclear.

Trope your cares away, down on Fraggle Rock!:

open/close all folders
A–L
M–Z
"We can not leave the magic!"
—The Trash Heap, uttering the last spoken line of the series
Feedback