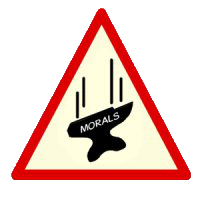 A portmanteau of anvil and delicious, anvilicious describes a writer's and/or director's use of an artistic element, be it line of dialogue, visual motif, or plot point, to so unsubtly convey a particular message that they may as well etch it onto an anvil and drop it on your head.

Frequently, the element becomes anvilicious through unnecessary repetition, but true masters can achieve anviliciousness with a single stroke. The easiest way to be Anvilicious is through simple cause-and-effect; someone will do something the writers consider "bad" and then something bad happens as a direct result. If the writers prefer not to show the direct consequences of whatever they're crusading for or against, a common alternative is to have a character presented as completely "centred", "unbiased", and "grounded" testify. Surely if this character agrees with something, it must be the right thing to do.

Which leads us to the deep question: Should authors try to make their Aesops subtle? Or do Anvilicious Aesops actually have a good side, i.e. the fact that people immediately see what the author is trying to do with them?

Compare & contrast Propaganda Piece. See also Script Wank, Can't Get Away with Nuthin', Scare 'em Straight, Obviously Evil, And That's Terrible, and more than a few Clueless Aesops. Always remember that Some Anvils Need to Be Dropped. Not to be confused with the literal Anvil on Head.

In other words, blatancy in regard to the moral of your story is BAD, m'kay? Except when it's not.