Can't Get Away with Nuthin' 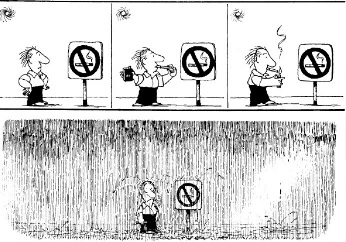 Not even God likes smoking!
Buffy: I told one lie...I had one drink...
Giles: Yes, and you were nearly devoured by a giant demon snake. I think the words "let that be a lesson" are a tad redundant at this juncture.
— Buffy the Vampire Slayer
Advertisement:

In the land of television, morality and justice are swift, sure, and anvilicious.

Okay folks, listen up: many of the dangerous behaviors in life are as insidious and widespread as they are because most of the time, nothing bad comes of doing them. If you don't wear your seat belt, most of the time, you'll be fine. It's just that on the rare occasion that fate calls you on it, the results are usually catastrophic, but if you do something wrong/dangerous/stupid on a TV show and divine justice isn't carried out, sometimes Media Watchdogs and Moral Guardians will decry the show for "promoting high-risk behavior".

So on a lot of TV shows, especially those aimed at children, every time you do something bad, justifiable or not, you will get caught.

There is a possibility that this trope is used simply because it's a good way to end a particular story, or an author's personal fantasy or something, and not as a deliberate way to get any message across. If fantasy was always like real life, then it would probably be completely boring. It's also a matter of basic story-telling economy: having a scene where a character does something with no consequences at all is just wasting a good scene.

On a Sitcom, this isn't usually all that big a deal, except during the Very Special Episode. In the Teen Drama, it's a recipe for tragedy. Drive drunk even once and somebody is going to die. Have premarital sex even once and there's going to be an STD or an unwanted pregnancy note (although logically speaking, there can't be an STD unless at least one of the people has had sex before, except in the less likely-to-be-used case of being given one non-sexually via birth, blood, or otherwise) and it's no use protesting, "But We Used a Condom!!" And heaven help you if you even look at drugs. This may be accompanied by an Inversion of Protagonist-Centered Morality to illustrate the dangers of peer pressure, by introducing characters who have been getting away with the bad thing for a while - but once the main character tries it out, things will immediately go wrong.

This is sometimes called an "Institutional Lie" — the deliberate exaggeration of the dangers of a certain behavior because the audience wouldn't be persuaded by the actual dangers in the time allowed.

The problem with this kind of lie is that it doesn't convince anyone. Rather than having the desired effect, the audience is liable to dismiss the morality play as obvious fiction, and their trust is lost.

If the disaster that comes from risky behavior is implausible rather than merely happening quicker than you might expect, it's a Space Whale Aesop.

A common delivery method for Can't Get Away With Nuthin messages is the Scare 'Em Straight. A (usually) comedic variation, in which everyone else is getting away with worse misdeeds but one character Can't Get Away With Nuthin for a lesser misdeed, is Selective Enforcement. Very often, this is paired with Chekhov's Gun, as attention wouldn't be brought to the misdeed if it wasn't going to be relevant later on.

The Inverted Trope is Can't Get in Trouble for Nuthin'. The polar opposite of this trope is Karma Houdini.

An Enforced Trope during the The Golden Age of Hollywood, where The Hays Code prohibited any sort of Karma Houdini. See "Rise and Fall" Gangster Arc for a by-product of this restriction.

Even though they were able to get the mission done just fine, Black Hat still has them all punished because they ended up leading Sunblast to his lair and then tried lying to him about it.

Even though they were able to get the mission done just fine, Black Hat still has them all punished because they ended up leading Sunblast to his lair and then tried lying to him about it.