Series / The Worst Week of My Life 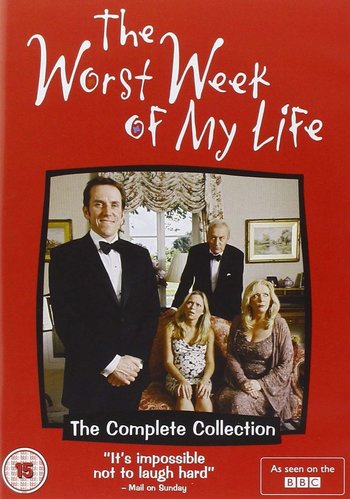 British comedy show with each series structured around and focusing on a week in the life of perennial Butt-Monkey Howard Steel (Ben Miller), a hapless publisher who has a knack for complete destruction and self-humiliation. Howard is a pretty nice guy who means well and only wants to help — however, unfortunately for him and those around him, he is the perpetual victim of a cruel and vicious fate that appears determined to actively torment and humiliate him at every opportunity. As such, throughout the week he constantly faces minor inconveniences that balloon into magnificent crises. He is surrounded by people who just seem determined to misunderstand and / or ruin things for him (and who inevitably think the worst of him or find some way to blame him when everything goes wrong) and who all seem to actively conspiring to make his life far more difficult than it has to be. Every single act of clumsiness or thoughtlessness that he commits will escalate into magnificent acts of destruction, and every innocently-meant little white lie that he tells will become a torturous act of deception just waiting to collapse in on him. And as if it was clockwork, everything mentioned above is destined to backfire on Howard at exactly the worst moment for him personally.

It doesn't help that Howard's loving but long-suffering and short-tempered fiancee / wife Mel (Sarah Alexander) is blessed with a low tolerance for Howard's antics, and that her father Dick (Geoffrey Whitehead), a snobby High Court judge who detests Howard immensely and would be inclined to think the worst of him at the best of times, often finds himself in particular suffering directly from Howard's misfortunes and thus refuses to give Howard the benefit of the doubt in any situation. It also doesn't help that Howard is incapable of explaining himself without inevitably making things sound much, much worse than they are.