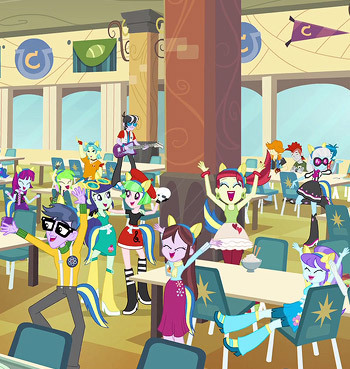 Things are unusually stable here.
"I thought the last day of high school would be the best day of my life until I realized what I'd be leaving."
— Zack Morris, Saved by the Bell
Advertisement:

If the likes of Buffy the Vampire Slayer and My So-Called Life and (especially) Heathers have taught us nothing else, it is that High School is Hell. Sometimes literally.

While few shows will go so far as to claim learning is fun for its own sake, or that the Alpha Bitch or a Jerk Jock can't make life troublesome, several shows seem to think high school is not all that bad. They seem to have a point: You get to play sports (if you want), find your High-School Sweetheart at the High-School Dance (if you are lucky) and make some of the best friends you will ever meet. Indeed, even those shows that paint an extremely negative picture of high school life usually acknowledge the importance of friends.

Cliques might be notably absent, but if they are present, the main characters will maintain friendships across the class divide.

These being the Best Years of Your Life may or may not be strongly implied as well.

Depending on the troper, this may or may not be Truth in Television. For the latter, this trope exists pretty far toward the idealistic end of the Sliding Scale of Idealism Versus Cynicism. Relatively few shows occupy much of a middle ground; either high school is a place of utter misery or despair, or it's a wacky fun-filled ride.

A subtrope of High School. Not to be confused with naturally occurring aggregates of minerals and/or mineraloids that attend high school. See also Growing Up Sucks and Future Loser. Contrast Middle School Is Miserable.

Apparently Truth in Television for the author, who made a similar point when explaining why his Doctor Who High School A.U. was remarkably free of angst.