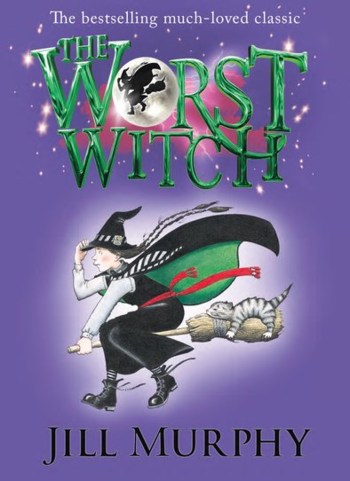 Onward, ever striving onward
Proudly on our brooms we fly
Straight and true above the treetops
Shadows on a moonlit sky
Ne´er a day will pass before us
When we have not tried our best
Kept our cauldrons bubbling nicely
Cast our spells with zest.
— Academy song
Advertisement:

The first television series and its two Spin Offs are:

A new TV adaptation began on 11th January 2017 on CBBC, and was later made available for international streaming on Netflix. The 2017 adaptation came to an end on both August 10, 2020 on CBBC and October 1, 2020 on Netflix.

The 2017 show premiered on Disney Channel on October 4th, 2021 as a "Disney Channel Original Series". However, unlike the previous incarnations (Netflix and CBBC) of the 2017 show, this version featured a Laugh Track to match with its current Disney Channel sitcoms. The series finished on October 31, 2021 with the episode, "Ethel Hallow To The Rescue" as the Grand Finale.

"You don't need a cauldron and you don't need a spellbook. There is magic inside each and every one of us. Witch or not. You just have to believe in it."
Statler: Believe?! How is that a magic word?
Waldorf: I don't know. How about we believe in the power of stupidity?
Both Do-ho-ho-ho-ho-hoh!