If you're looking for the animated series, see Teacher's Pet. 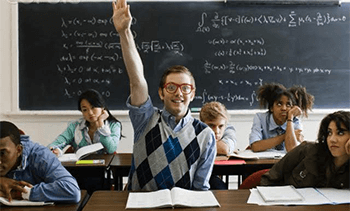 "Teacher, teacher! I know! I know!"
"I was so unpopular in high school, the crossing guard used to lure me into traffic."
— Annie, Community
Advertisement:

This is the kid at school that nobody likes. Not because they're stupid, or annoying, or a bully, but because they suck up to the teacher. They'll bring the teacher the traditional apple every day, they'll always volunteer to answer any question, and more often than not they'll be The Informant to the teacher, tattling on the other students whenever they make the smallest infringement of the rules.

Needless to say, most of the other students tend to despise this person, and they're often portrayed as a traitor to the rest of the class. Typical of series that are set in elementary school. The older the kids are in the setting, the better the chance that the teacher really hates their guts. If the students are in college though, the tables are turned as everyone needs to get close to a professor for participation marks, reference letters they'll need for adulthood, or introductions to industry contacts who can help with their internship or entry-level job search.

Not to be confused with the 1958 Romantic Comedy.