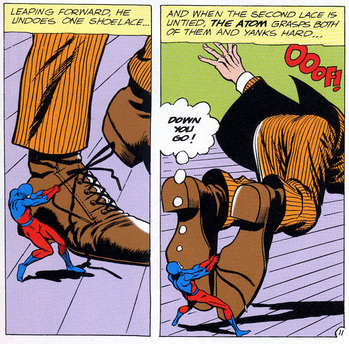 "I tied my shoes together and fell down three times!"
—Ralph Wiggum, The Simpsons: Road Rage
Advertisement:

A good way to simultaneously express just how mean and crafty someone is, usually but not limited to kids, is to have them tie an unsuspecting someone else's shoelaces together. Then, when the victim gets up to walk, they fall over, often face first. If the prankster is quite small in comparison to the prank victim's shoes, then this doubles as Hobbling the Giant.

A common practical joke in Real Life as well.