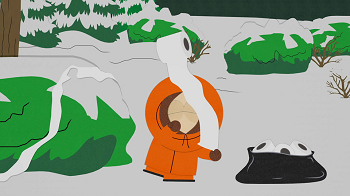 It's childish. It's wasteful. Yet it happens anyway. Every so often, someone will wrap a tree or other structure in toilet paper. This tends to happen most often around Halloween, but that's no guarantee some mischievous prankster won't pull it some other time of year. It may also be done as some form of revenge against someone. It's done in part because it's easy to drape items in toilet paper (traditionally done by throwing the roll up and over), but the toilet paper is difficult to remove, particularly if it gets wet, as the individual sheets shred and separate.

This trope is most often done by children, although it could be pulled by a Manchild as well. In any case, it's associated with immaturity.

This is a Practical Joke trope. Compare There Will Be Toilet Paper and Toilet Paper Trail. Often seen as a form of Halloween Trickery, along with Egging.