Tongue on the Flagpole 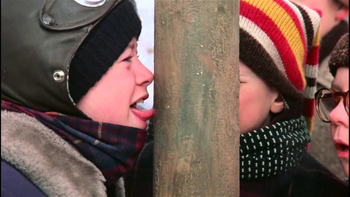 A character, usually (but not always) a kid, is dared to place his tongue on a flagpole (or other metal object) in sub-zero temperatures. The tongue becomes stuck to the flagpole and the characters must find the means to separate it.

Do not attempt this in real life, as the saliva on your tongue will freeze on contact with a cold surface, and it's possible to lose your tongue to severe frostbite. If it happens, have a friend apply warm water or use a blow dryer to melt the ice. Don't try to tear it off, as you will lose a chunk of your skin.

Tongue on the ice sculpture!

Tongue on the ice sculpture!