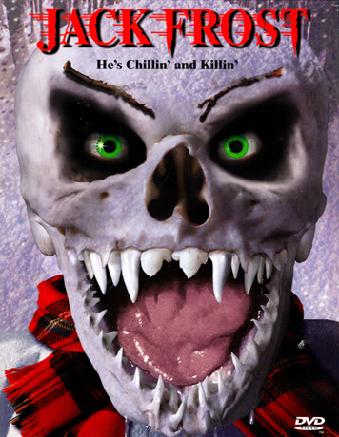 Ah, snowmen have peepers. Peepers to watch. To watch for a moment of weakness and then BAM comes the knock in the head and we're down!
Tommy: I said, who's there?
[Jack Frost hits Tommy, and enters the house]
Jack Frost: Well it ain't fucking Frosty!
Advertisement:

Jack Frost is a Slasher Movie duology about a serial killer (Scott MacDonald) who gets mutated into a snowman. Both films are campy direct-to-video efforts, but the first one is better known due to sharing its name with a family film with a similar plot.

It was given the RiffTrax treatment in December 2017.

Jack Frost 2: Revenge of the Mutant Killer Snowman has examples of: