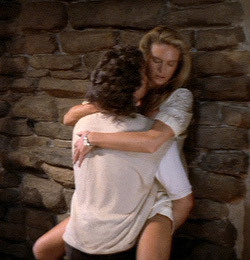 Caution: do not try this on brick.
Jack: Bianca wanted it 6, 7 times a day. Always standing up.
Liz: Standing up? How would that even work?
Jack: You're joking, right?
Liz: [sheepishly] Yeah...
— 30 Rock
Advertisement:

In short, when two people are having sex against a wall or other vertical surface, often spontaneously. One of the most common sex positions in films and television shows, as it can be worked into almost any setting (since almost any setting will have a wall, a tree, etc.) and avoids the need for nudity, thereby allowing the scene to pass with a lower content-censorship rating. Its spontaneous nature also makes it popular when one or both partners is cheating, or the affair is forbidden for some other reason. In Real Life this can be done, but is not as easy as it looks: holding someone up against a wall can get tiresome fast depending on the carrier's strength and endurance, and the person doing the wall-banging runs the risk of dropping their poor partner (which carries a significant risk of a self-inflicted Groin Attack).

Not to be confused with someone banging their head against a wall, or a Harvey Wallbanger

(well, unless one of the participants happens to be named Harvey), or Right Through the Wall (though overlap with the latter is obviously possible), or Wallbonking (though that can end up looking like this), or firing squads. Also not related to the technique of "Wall-banging" in FPS games (which is about bullets going through walls and dealing decreased damaged to the person on the other side). Often includes Right Through His Pants.

The title is derived from Wall Banger, a page that has since joined the Permanent Red Link Club.