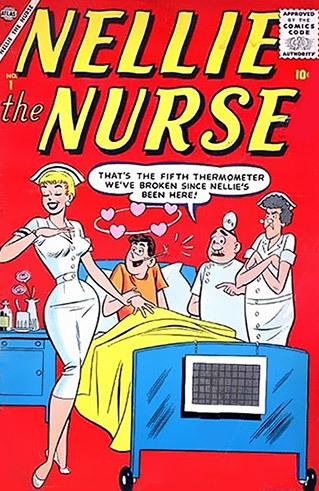 "Do all hospitals usually have this many cute nurses on their staff or was this place purposely stockpiling to make sure that they had a steady influx of self-injured male patients?"
— Crossroads
Advertisement:

Exactly What It Says on the Tin, medical personnel who are attractive. Makes you just wanna shout: "Helloooo, nurse!"

Unfortunately for people who expect this trope to be Truth in Television (there indeed are some lovely women working as nurses), anyone who has ever been to a real hospital will notice that the nurses are more concerned with their jobs than titillating their patients. They will be wearing little if any makeup, and will always be in Boring, but Practical scrubs, which are nowhere near as appealing as the fetishized nurse outfits in media, and you'll almost never see a nurse on the job with her hair done up like they always do on TV. In fact, this is almost entirely discouraged on ethical grounds, and nurses (and female MD's, of course) are going to be told to keep the revealing stuff for nightclubs pretty much throughout their medical school education. The fanciest "style" you will likely ever see is a simple ponytail (or possibly a Prim and Proper Bun), for hygienic reasons.

Even in the cases where this trope is Truth in Television, there's not a lot of sexy activity going on. Nurses see you when you look and feel your worst. They watch you vomit, clean your catheters and bedpans, wipe your nether-regions, jab you with sharp needles, and are prone to sticking uncomfortable things in various orifices. And there is really nothing pleasant about genital or rectal examinations. Just because you might be naked does not mean anything fun is about to happen.

Please note that this applies to a character, not simply any hot actor playing a hospital worker, for the same reason Real Life examples are not listed here. Most actors are "hot" in the first place, so it usually goes unsaid. You can have an attractive hospital worker without their hotness being a plot element in the work - that would not fall under "Hospital Hottie". In contrast, if someone is specifically attracted to nurses, that falls under Inherently Attractive Profession.

This trope is distinct from the one that used to be named Hello, Nurse!, although they can overlap at times. If you were looking for that one, it's now to be found at Head-Turning Beauty. Contrast Orderlies Are Creeps, for cases when the hospital staff is creepy and inappropriately lewd towards patients.