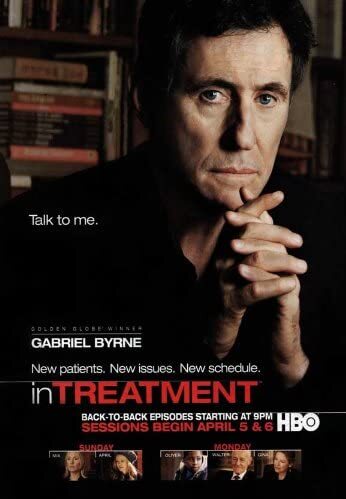 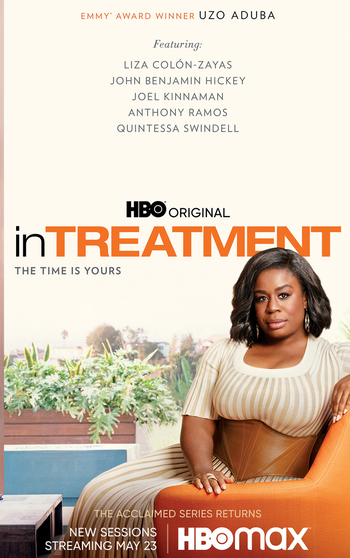 Dr. Brooke Taylor
Based on the Israeli drama BeTipul, this HBO show thwarts There Are No Therapists and Hollywood Psych (as best it can in a 30 minute time limit per episode, anyway). Set in Baltimore and later Brooklyn, it shows 4 sessions a week of Paul Weston (Gabriel Byrne), therapist, and his clients. Some of Paul's own personal issues come out during the sessions, as well as seeing Paul's family. On the fifth day, Paul sees his own therapist / ex-mentor Gina.
Advertisement:

Note: even though you may want to skip watching certain patients every week, you really can't skip any of them in order to make sense of some other episodes (especially the Gina ones).

The show has a bit of Epiphany Therapy to it, given the short timelines, but otherwise seems to try to be as realistic as it can about the therapeutic process. The credits also show they have a professional therapist consultant.

The series started in 2008. It was not a big moneymaker for HBO (perhaps owing to its slow-pacing/reliance on dialogue) but a third season started in 2010. It cuts things down to three sessions a week. The series unofficially ended in December 2010, when HBO did not renew it, but did not officially cancel it. There were rumors about it returning for years, until July 2020, when HBO officially announced Season 4, a Retool, which will be set in Los Angeles, have an entirely new cast, with Uzo Aduba as Dr. Brooke Taylor, replacing Gabriel Byrne. It premiered on May 23, 2021.