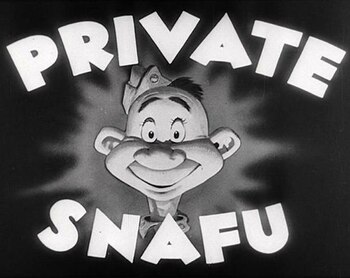 A Wartime Cartoon series made during the 1940s, starring the eponymous Private Snafunote An acronym for "Situation Normal, All Fucked Up" — though the "Fucked" part would be Bowdlerised as "Fouled" set during the struggle of World War II. Produced by Warner Bros. for the Army-Navy Screen Magazine, these cartoons showed Snafu's adventures in the Army. They usually ended with various Aesops concerning proper military behavior, via the confoundingly insipid acts of the brash but ignorant Snafu.
Advertisement:

It could be considered a Spin-Off of the Looney Tunes and Merrie Melodies series of cartoons, supported by a few cameos of Bugs Bunny and usage of Mel Blanc as the voice of the bumbling Snafu, though, unlike the Looney Tunes/Merrie Melodies cartoons, the Private Snafu shorts were more adult, allowing a lot of scenes and gags that wouldn't have been approved by The Hays Code (mostly showing women in various states of undress and other sexual referencesnote like the malaria mosquito who looks and acts like a worn-out, alcoholic prostitute forced out of her profession due to a crackdown on vice as seen on "It's Murder She Says", but there was also some crude humornote Private Snafu usually ends up naked due to an explosion or gets poked in the butt or pokes someone else in the butt, but "Fighting Tools" had Snafu fire a gun that shoots up mud with the kind of gross, squelchy noise one would associate with diarrhea and swearingnote mostly "hell" and "damn").

The Private Snafu shorts were largely sealed away after the end of the war, never to be seen again...until Cartoon Network aired some as part of two Toon Heads specials: one about Warner Bros.' lost and rare works and another about World War II cartoons. A few shorts appeared as extras in the Looney Tunes: Golden Collection DVDs (and there's even a documentary on how the shorts were made and what impact they had on the history of animation). Some of them are available for viewing on the Internet Archive

A complete chronological DVD release of the whole set of Private SNAFU cartoons newly remastered from the best extant film elements, was released by Thunderbean in December 2010.

Oh, and Thedore Geisel (better known as Dr. Seuss) wrote many of the early shorts in his characteristic rhyme. Think about that next time you read any of his children's books (The Cat in the Hat, How the Grinch Stole Christmas, One Fish Two Fish Red Fish Blue Fish, Green Eggs and Ham, etc) to your son/daughter/younger sibling/younger relative/children at school.