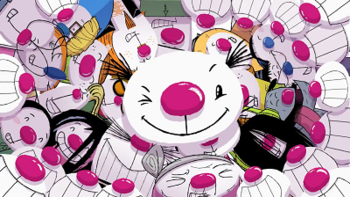 The Crumpets (Les Crumpets) is a French comedy Flash animated series debuted in December 2013 about a huge family of white, pink-nosed people, based on the Petit Dernier preschool Picture Books by Didier Lévy and Frédéric Benaglia, and produced by 4.21 Productions.
Advertisement:

The first 52 episodes for this obscure show which originally aired in 2013-2014 closely highlight several family members, with the actual central characters being the youngest child Li'l One and the family's gambling matriarch Granny. Ma is an inventor and Pa is a gardener, and they adore each other. Their other children include the tall and sleepy Pfff, the gothic bipolar Caprice, the physically strong Triceps, the head-losing thinker Ditzy, the eccentric artist Fynartz, the mischievous twins Bother and Blister, the scaredy cat Ohoh, and the lion costumed King. The Crumpets' irritable neighbor is Ms. McBrisk, who lives with her beautiful daughter Cassandra. Pa's rich fleecing brother and sister-in-law are Uncle Hurry and Aunt Harried, whose adopted nerd son is Cordless.

In December 2015 and December 2017/January 2018, a total of 52 more episodes that are internationally known as Teen Crumpets debuted. The show was renewed for these episodes because feedback

for the original seasons summarized that the teens and tweens are the show's most popular characters. This Retool shifted the teenagers and new musical numbers (mainly rock ones) to the spotlight and reduced focus on most preteens (including Li'l-One) and adults. In April 2018, Teen Crumpets won the "12+" category award in that year's Cartoons On The Bay in Italy; the show's behind-the-scenes Facebook profile

hinted more episodes to come. A jury prize award was also earned by Teen Crumpets in a Georgian animation festival in October 2018. A 26 minute special about International Women's Day premiered in March 2021.

The original 52 episodes can be viewed on Amazon Prime

in the UK. The first twenty episodes dubbed in English (plus "The Mix-Up"

. A trailer and an English dubbed episode (with a presumably different voice cast) of Teen Crumpets are viewable on the C21Media website

Despite the adaptation source being aimed for preschoolers, its colorful visuals, adorable characters, and being broadcast as children's programming, the show contains a hefty amount of inappropriate material to kids such as sexual themes, suicidal behavior, animal harm, and rare gruesome violence. Many of these elements were softened in season three before they're somewhat elevated back for season four.

A character page is available, as is a recap page. There is also The Crumpets Wiki

Not about a bunch of breadnote except for the show's few jokes on literal crumpets or a 2015 food ad campaign using The Muppet Show characters.

Dittzy has her head seperated from her bod like a balloon.

Example of:
Losing Your Head

Dittzy has her head seperated from her bod like a balloon.