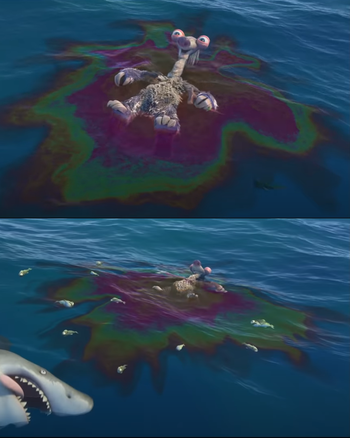 "This is my first bath in decades!"
"I-I can't believe it, he [Don Octavio] flooded that aquarium with tar... all those poor dead fish!"
—Bentley Turtle, Sly 3: Honor Among Thieves
Advertisement:

In any visual work where a body of water is suddenly afflicted by something, be it a toxic shock, electricity, or even farts, frequently expect lots of dead fish to suddenly pop up on the surface as a display of its potency. If the character in question is hungry, this may be a way to find food. Almost always Played for Laughs and an example of Black Comedy Animal Cruelty. Otherwise, it usually serves as an expression of the power of whatever happened to the water.

are unfortunately a very real problem that have become increasingly frequent from various causes of human origin. Still, most of these are in the range of days or hours rather than seconds as portrayed in media. An exception is for underwater explosions, that can either immediately kill or at least disable a fish's swim bladders, causing them to float up. This is a tactic that has sadly become a common way of fishing

in parts of the world.

Compare That Poor Plant. Canary in a Coal Mine could be seen as a more serious counterpart to this trope. Electrified Bathtub is a common way for this to happen. When used for comedy, this trope is usually facilitated by No Cartoon Fish.

Not related to killing someone with a fish, instantly or otherwise. That's Shamu Fu.