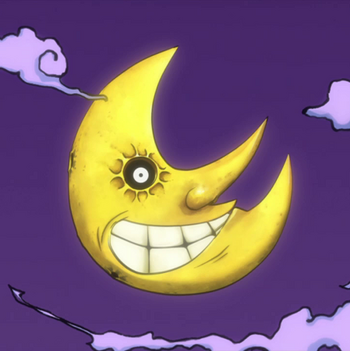 "There liveth none under the sunne, that knows what to make of the man in the moone."
— Endymion, John Lyly.
Advertisement:

The brother trope to The Face of the Sun, the Man in the Moon is that old conception of the Moon as possessing a face, most often a male one. The moon is often an aged but benevolent figure who stands over the Earth, granting it natural bounty or serving as the destination for young adventurers. This trope, while at least Older Than Feudalism, is nowadays mostly only seen in quirky video games and animated children's media.

This conception, incidentally, is primarily Western. East Asian cultures, such as that of Japan, tend to see the Moon as having a rabbit on its face, rather than possessing human features.

Bears little to no relation to Weird Moon. See Moon Rabbit for the version more popular in East Asian cultures. Men on the Moon may be Lunarians. See also God of the Moon, for entities distinct from the moon itself but which otherwise embody or govern it.

Not related to the film of the same name.