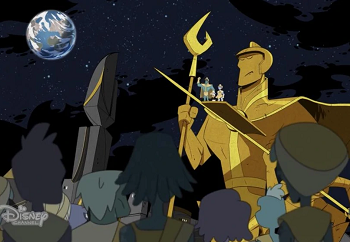 Lunaris: Greetings, puny Earthers. I am General Lunaris of the vastly superior Planet Moon.
Scrooge: Umm, The Moon's not a planet—
Della: Yeah, it's a whole thing with them.
— DuckTales (2017)
Advertisement:

What if intelligent life wasn't on some distant star, but in the heavenly body right next door?

The idea that there might be life on the Moon goes back all the way back to True History, by Lucian of Samosata (2nd century AD),note Keep in mind that this was written in response to an earlier story, so the idea may potentially be considerably older and showed up in a lot of proto-science fiction afterwards. It should really have died with the development of high-power telescopes in the late 18th century, but hung around as at least the subject of spoofs. By the end of the 19th century, any astronomer could literally see that there was no life on the surface of the Moon, although some writers suggested that there was once life on the moon, leaving behind ruins for their heroes to explore.

In most modern SF, lunar inhabitants tend to be human colonists; such examples fall under Colonized Solar System. If said colonists have evolved or otherwise changed into something other than human, then it becomes this trope again via Transhuman Aliens.

Contrast The Man in the Moon, Moon Rabbit. Sub-trope of Solar System Neighbors. May be encountered in a Trip to the Moon Plot.