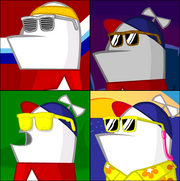 Wearing dark glasses or mirrorshades is long-standing visual shorthand for badassitude. The act of putting them on means that it's time to kick ass, take names or do both. The act of taking them off is a sign that somebody's about to get scrutinised by the badass, usually just prior to an asskicking.

Obligatory for a Cyberpunk setting, or for intimidating Deep South Lawmen. A nice accessory to a Badass Longcoat.

The opposite of Nerd Glasses, and the inverse of The Glasses Come Off.

Overlaps, but is not identical to, Scary Shiny Glasses. If the shades are on the character 24/7, it's Sunglasses at Night. If the effect is to make the wearer look sinister rather than badass, this is Sinister Shades. If you're Making a Spectacle of Yourself, the effect is to make you look just plain weird. But remember, sometimes the Goggles Do Nothing. Occasionally the character may just wear their glasses on their heads as a head decoration rather then where their eyes are.

Aside from making them look badass, the reason behind them wearing shades is so they don't show that their eyes flinch when firing a weapon or having massive swords flung at their face. So when a character isn't wearing any shades and running around firing automatic weapons and manages to show no discomfort you know they're truly badass.

Another reason being that most people commonly have visual cues they give with their eyes subconsciously. Something a properly trained (or badass) opponent might pick up on. If they can't see your eyes, obviously they won't see you look at the gun before you leap into a roll for it, or look at the guy in the corner right before shooting him and making a break for it.

Each type of frame has become an archetype of its own over the years: Wayframesnote Those square plastic glasses are commonly associated with power and status (and celebrities in general) or with bohemian intellectuals, while metal framesnote Most usually Aviators and Round Hippie Glasses are mostly sported by either hippies or policemen (and for that matter, armed forces in general),note be sure you get the frame shape right or you'll wind up suggesting that your General Ripper drops acid; of course, that might be exactly what you're going for and Wraparounds have found their place within espionage.

For some specific variants, see Sinister Shades, Triangle Shades and Round Hippie Shades.