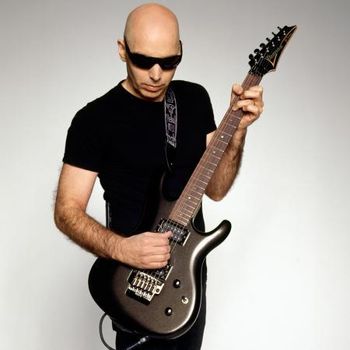 "I can embarrass myself very easily on guitar. It's funny because people say to me I can play anything; I'm God on the guitar. But I could make a big list of everything I can't play... I'm grateful that people don't notice that."
Advertisement:

Joseph "Satch" Satriani (born July 15, 1956) is an instrumental rock and Progressive Rock guitarist from Westbury, New York. He is an immensely influential man and the teacher of other guitar legends including Steve Vai and Kirk Hammett. He is the guitarist for Chickenfoot. He sued Coldplay for plagiarism of his 2004 song

for use in their 2008 Grammy winning "Viva La Vida

." Note that he sued before Coldplay won the Grammy. The case was settled out of court.

In 1993, he was a temporary member of Deep Purple, after Ritchie Blackmore abruptly left in the middle of a tour. He declined an offer to join as a permanent member after the tour.

In 1996, Satriani started the first of many G3 tours, where he and two other guitarists(Vai usually one of them), would play individually and then together. Ever since the tour has featured: John Petrucci, Eric Johnson, Kenny Wayne Shepherd, Yngwie Malmsteen, Michael Schenker, Uli Jon Roth, Paul Gilbert, Adrian Legg, and Robert Fripp.

Satriani's style consists of high speed legato, two-handed tapping, and whammy bar harmonics, combined with a deep understanding of music theory that make him one of the most technically advanced guitarists.

is considered to be the most challenging song for guitar available on Rock Band; believe it or not, Harmonix added no additional Fake Difficulty notes to the solo.

This guitarist may exhibit the following tropes: