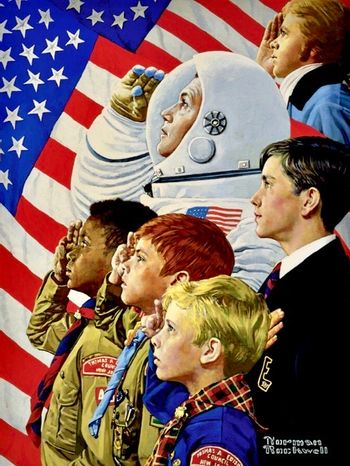 Be the American the Japanese think you are.
Advertisement:

When viewed from the outside, The United States of America comes in different flavors. As with most stereotypes, there is a certain amount of Truth in Television in both of them.

A peaceful paradise on earth full of friendly, wise, and good-hearted people whose prosperity is their (God-given) reward for their impeccable virtue. Theirs is a shining city upon a hill guided by destiny: a land of freedom, justice, wealth, and luck, where people can leave their pasts behind and create entirely new lives for themselves, far from the stratified social structures and open ethno-religious bigotry and violence of the Old World. In short, this is the country that embodies The American Dream. Sometimes based on American media during The '50s and The Silver Age of Comic Books, which portrayed the United States of America as a homey, traditional world of heroes built upon on (nuclear) family values, love, and old-fashioned simple mindsets. This flavor is, of course, no "truer" than any other, and especially not when it comes to individual US citizens.

A Crapsack Land full of war-mongering, ignorant Jerkasses whose prosperity, when it exists, is the product of their infinite greed. Americans come into your country either as tourists or invaders, always acting like they own the place and letting you know how it "should be" run. Whenever they talk, it will always be as obnoxiously loud and as offensive as possible, claiming it's "freedom of speech." In the rural areas of the Deep South and The Wild West, you'll find disgustingly obese, Red-baiting, Bible-thumping, gun-toting, heteronormative redneck Moral Guardians and Obnoxious Entitled Housewives who subsist on a diet of synthetic fast food and TV dinners, while in the cities, you'll find crime-ridden ghettoes, vapid rich bitches either hailing from Hollywood California or trying to emulate it, and social Darwinist, Scrooge-like corporate profiteers who view poor people as a plague upon humanity. Also, woe betide you if you're an immigrant, a minority, or both; you'll be forever treated as a second-class citizen at best or utter vermin at worst. If you're a foreign nation, you'd better hope that you don't have some sort of export the Americans rely upon, because the minute that they sense any threat to their supply, they'll invade you (if you're lucky) or send money and arms to whoever they want in power (if you're not), almost always some godawful kleptocrat who is submissive to their interests. Last but not least, they suck at global geography. The Bronze Age of Comic Books and especially The Dark Age of Comic Books frequently began to reflect this flavor, which once again is no "truer" than any other, and especially not when it comes to individual US citizens.

Other works just decide to split the difference, treating America as essentially the Boisterous Bruiser Idiot Hero of nations: rude, crude, clueless, obnoxious, and vaguely psychotic, but still good-natured beneath it all. A famous saying, often misattributed to Winston Churchill, sums up this portrayal well: "You can always count on Americans to do the right thing... after they've tried everything else."

This trope is about outsiders looking at the USA, so as you may expect most of the information here is heavily stereotyped and (potentially) extremely culturally offensive to actual Americans. If you happen to see a work that portrays the United States or its people as a whole as The Boorish, but it's actually an American production, that will be a case of Cultural Cringe, My Country Tis of Thee That I Sting, or Boomerang Bigot; likewise, an American indulging in The Beautiful is not this trope either, and would better fit into Creator Provincialism, Patriotic Fervor, or My Country, Right or Wrong. And if the work in question doesn't delve into blanket judgment either way but simply refers to US culture and history by both structuralist and functionalist examples, then you're probably reading an in-depth history book.

The memetic term 'Murica is related to these interpretations: that America is either a Land of Heroes, or a Wretched Hive. For the symbolism this trope is named after, see American Eagle.