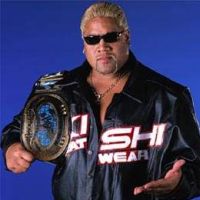 Solofa F. Fatu Jr. (born October 11, 1965) is a Samoan-American Professional Wrestler best known for his work in WWE in the 1990s and early 2000s as Fatu, The Sultan and, especially, as Rikishi. He debuted in 1985 in the International Wrestling territory in Montreal as Alofa the Polynesian Prince. He switched to the Fatu name when he and his cousin Samu started teaming in the World Wrestling Council promotion in Puerto Rico as the Samoan Swat Team. They would go on to compete in World Class, the AWA, WCW and many other promotions. In 1992, they arrived in WWE and were renamed The Headshrinkers. This lasted until Samu left in 1994 and was replaced by Sionne (The Barbarian), who left in 1995. Fatu was repackaged with a gimmick based on his own life, as a street-smart, tough Samoan who had survived getting shot and wanted to use that to send an anti-drugs/anti-violence message. He was billed as "Make a Difference" Fatu. In late 1996, Mr. Bob Backlund brought back The Iron Sheik as the co-manager for Sheiky's new discovery, the Sultan. This gimmick had Fatu wearing a mask and not speaking. He jobbed a lot in this gimmick and he disappeared in early 1998. He returned in late 1999 as Rikishi Phatu (shortened to just Rikishi after a couple months), doing a dancing sumo gimmick, which got over far more than anything he had done before. He had a brief heel run from late 2000-mid 2001 after he claimed to have been the one who had run over "Stone Cold" Steve Austin at Survivor Series 1999. He suffered an injury that put him on the shelf for a while and when he came back he was a face and his previous heel run was never acknowledged. He left WWE in 2004 and would go on to compete in TNA as Junior Fatu and for numerous independent promotions. Among his in-ring achievements, he is a former WWE Intercontinental Heavyweight Champion

w/Scotty 2 Hotty, and in 2000 Pro Wrestling Illustrated gave him their "Comeback of the Year" Award.

"Back That Trope Up!"