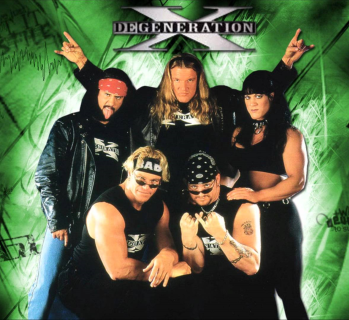 "Look at us. Look at us! The Bullet Club! We're all champions! We're coming to Ring of Honor to beat the crap out of everyone who steps in our way!"
— "The Machine Gun" Karl Anderson
Advertisement:

There is always strength in numbers. Professional Wrestling is no different. Someone who wants to get to, or stay on, the top of the game is best served to seek allies. Some wrestlers can rely on their family; others band together by virtue of similar character or common interests. Still others band together for one purpose, and one purpose only — to watch each others' backs, and better their own positions in the company. These wrestling mutual-aid societies are called power stables. While a staple of wrestling, it can occur elsewhere.

Like in all fictional groups, the members of a Power Stable have a tendency to fit certain archetypes. Generally speaking, each stable will play host to at least three of the following core character types:

In addition, the stable may include some of the following characters:

Note that most Power Stables are heels; it's not impossible for faces to form a stable, of course, but generally faces don't seek power to the degree that heels do; thus most face stables tend to be either gimmick stables or families. If they do form a Power Stable, it's generally because the promotion is so heavily factionalized or an already-existing heel stable is so dominant at the moment that grouping together is the only way to level the playing field, or because the stable itself has existed for so long that it's actually built up a legacy of greatness, rather than backbiting or infighting (see: the later incarnations of the Four Horsemen).

This list is for groups with four or more wrestlers. For duos, check Tag Team. For trios, check Power Trio.