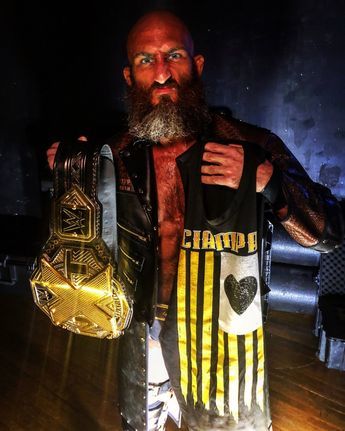 The Blackheart (with Goldie).
No one will survive...!
Advertisement:

Prior to the existence of the NXT brand, he appeared as one of Muhammad Hassan's lawyers and confronted The Undertaker under his real name. Then he signed to Ohio Valley Wrestling in 2007, but had to retire due to injuries. After a second stint in the indies (which included the stint in ROH and a brief appearance at TNA), he re-signed with WWE, this time for the NXT brand on September 2, 2015. He began performing in a Tag Team with Johnny Gargano called "#DIY", with whom he won the NXT Tag Team Championship, until their disbandment, which gave birth to one of the most prominent storylines of the entirety of wrestling. And that's not hyperbole. After all was said and done with "Johnny Wrestling", he set his sights on the NXT Championship itself, obtaining it in 2018.