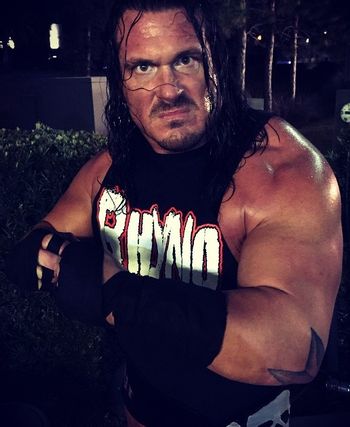 Terrance Guido Gerin (born October 7, 1975) is an American Professional Wrestler from Dearborn, MI best known for his work in ECW, WWE and TNA as either Rhino or Rhyno. He debuted in 1994 as Terry Richards, competing in the Detroit independent scene and doing some TV jobs for WWE and WCW. He changed his name to Rhino Richards and, along with working in the Midwest and Canada, also competed for the Catch Wrestling Association in Austria/Germany. In 1999, he debuted in ECW simply as "Rhino," as muscle for Steve Corino in Corino's feud with Taz. He would go on to hold the ECW World Television Title

twice and would be the final ECW World Heavyweight Champion

. After ECW closed, he signed with WWE and debuted, renamed "Rhyno," on the March 19, 2001 Raw, aligning himself with his old allies Edge and Christian from their days in the Canadian indy scene. He would switch to the Alliance.

Over his time in WWE, he would hold the WWE Hardcore Title

once. After WWE released him in 2005, he went off to TNA where he reclaimed the original spelling of "Rhino." He would hold the NWA World Heavyweight Title

once. He later spent time in Ring of Honor before going back to the independents. He later returned to WWE in 2015, and became one half of the first ever Smackdown Tag Team Champions alongside Heath Slater. He was released from WWE in 2019, and has since returned to TNA (now known as Impact Wrestling).