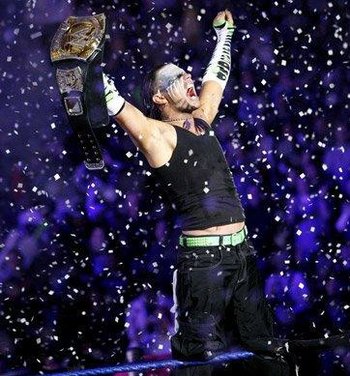 Don't you see the writing on the wall...

"People have tried to change me my entire life. And when they fail, I still come across as a failure. But it's easy to write, it's easy to say 'Jeff's a screw up! He's just gonna make a mistake again!' I think you're afraid. I think you're afraid to ask me why, because you might sense something human in me that'll just freak you out."
—Jeff Hardy, WWE Armageddon, December 14, 2008

He was released from WWE in 2021 after walking out of a match, and shortly thereafter signed with AEW, joining his brother Matt. In June 2022, he was suspended from AEW after a DUI arrest, and agreed to enter an alcohol rehab program.

While Jeff's made his living by being "extreme", some of the things in his matches bring his sanity into question. And while his wrestling persona can be pretty strange sometimes, he's reportedly even stranger in real life. Besides motocross, Jeff Hardy is also somewhat known for poetry, painting, sculpting and for being part of his own band but speaking of Jeff's life outside of wrestling, it hasn't always been much fun. He's had his house burn down with his dog still inside, he was arrested in 2009 after the police found a large stash of drugs during a raid on his new house, and as mentioned above had a DUI arrest in 2022note his third in 10 years, meaning it's a Felony rather than a Misdemeanour.

"Another trope is what there will never be":

Ladder Match for the WHC

Jeff's plans to crash through Edge were foiled when the latter got up.

One way or another, Jeff was going to drive Edge through that ladder.

Ladder Match for the WHC

Jeff's plans to crash through Edge were foiled when the latter got up.

One way or another, Jeff was going to drive Edge through that ladder.