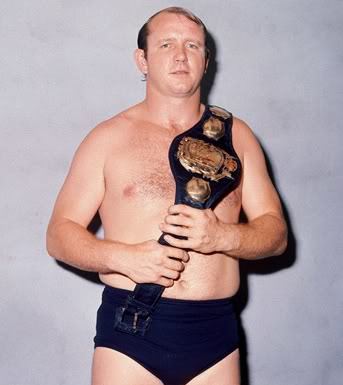 "Dory represents a very important era of the traveling world champion. In a pre-internet, pre-cable era, this guy was the biggest box office draw. Dory and his brother Terry, these guys were national stars before that was even a thing. These guys would go into various territories as the best pro wrestlers in the world. Dory is a legend for that reason alone. To be able to go into a hostile town and wrestle a local hero and put on a great show, that’s the type of thing I don’t think our sport will ever see again."
— David Lagana, NWA Vice President
Advertisement:

Dorrance "Dory" Funk Jr. is an American Professional Wrestler, trainer and promoter. He debuted in 1963 and wrestled all over the world, often teaming with his brother Terry Funk.

Along with his NWA World Heavyweight Title reign, he is a former 3x NWA (Amarillo) Western States Heavyweight Champion

, and he and Terry were inducted into the WWE Hall of Fame in 2009.