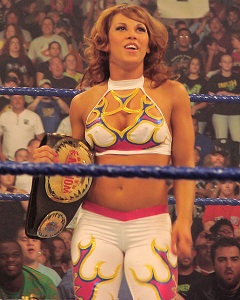 At SummerSlam 2008
"In my opinion, the best pure babyfaces of all time are Brad Armstrong, Ricky Steamboat and Mickie James. Mickie is always moving forward, up on the balls of her feet, going at her opponent. She always has that energy and passion, and it's infectious. Her smile is genuine. When she is winning, we celebrate with her. And when she is getting beat down, we want to fight for her."
— Tommy Dreamer
Advertisement:

Mickie Laree James-Aldis (born Mickie Laree James on August 31, 1979 in Montpelier, Virginia), already a local softball legend, became more widely known as an American valet and country music singer turned professional wrestler, trained by the staff of KYDA and The Funkin' Conservatory. She has had multiple runs in the NWA, particularly in TNA, which was founded as a member promotion, where she is a three-time TNA Knockouts Champion

and a 1x WWE Divas' Champion