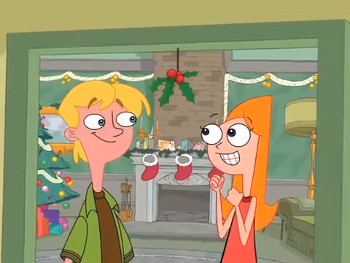 Looks like Candace is getting her Christmas wish.note  Hang on, that's holly.
"Ho-ho, the mistletoe, hung where you can see,
Somebody waits for you, kiss her once for me"
— Burl Ives, "Have a Holly Jolly Christmas", featured in Rudolph the Red-Nosed Reindeer
Advertisement:

Mistletoe is a parasitic plant that grows on trees. In some cultures, it's traditional to hang it up somewhere at parties, with the additional custom that if two people meet under it, they ought to kiss. Naturally, this produces some good opportunities for writers. Hilarity may well ensue as the wrong people are caught under it, or as the "right" ones are maneuvered over by matchmaking friends. Some writers may indulge in a bit of Ship Tease.

Mistletoe came to people's attention because it's evergreen and produces berries in winter, and is often one of the only green things in a winter forest. It comes up a lot in mythology — Greeks liked it, the Norse god Balder was killed by it, druids regard it as a symbol of immortality, and an old Christian story holds that Christ's cross was made of mistletoe, and after the Crucifixion all the mistletoe trees shriveled up. But the tradition everyone thinks of is originally Scandanavian — if two people are under a sprig of mistletoe, they must kiss. This was first a tradition that if two armies in a forest saw mistletoe growing, they stopped fighting for a night.

Despite the prevalence of this tradition, holly is frequently mistaken for mistletoe; holly has jagged, pointy leaves and red berries, while mistletoe has rounded leaves and white berries.

Even though the Maid doesn't like the General back, she allows him to kiss her under some mistletoe.

Even though the Maid doesn't like the General back, she allows him to kiss her under some mistletoe.