Series / Not Going Out 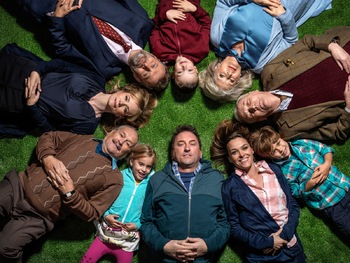 Not Going Out is a pun-heavy British sitcom starring Lee Mack that first ran from 2006 to 2014, followed by a one-off special in 2015 before resuming from 2017 to the present.

The show originally focused on Lee, a perpetually unemployed layabout who prefers to spend his time hanging around with his best friend, Tim (Tim Vine), rather than finding meaningful employment. In the first series, Lee rents a room from Kate, Tim's American ex-girlfriend. From the second series, Kate is replaced with Lucy, Tim's younger sister, a consultant with whom Lee shares a combative will-they-won't-they relationship.

Supporting characters during the show's original run included Barbara (Miranda Hart), Lucy's cleaner who never seemed to do much cleaning, Daisy (Katy Wix), Tim's Cloud Cuckoolander girlfriend. Cast turnovers during this time saw the departures of Barbara and Tim and the arrival of Toby (Hugh Dennis) and Anna (Abigail Cruttenden) a posh couple who spend most of their time sniping at one another and find themselves getting sucked into Lee and Lucy's lives.

After a brief hiatus following Lee and Lucy's wedding in the 2014 Christmas special, the show returned with a significant Retool and an eight-year Time Skip to focus on Lee and Lucy as a married couple with three children and the promotion of Lee's dad, Frank, and Lucy's parents, Geoffrey and Wendy, to major supporting characters alongside Toby and Anna.

Select episodes can be seen on Lee Mack's YouTube channel

Not Going Out Opening

The opening sequence for Series 2-3 of "Not Going Out" ends with Lee's section of the title going out, courtesy of Barbara unplugging it.

Example of:
Pull the Plug on the Title

Not Going Out Opening

The opening sequence for Series 2-3 of "Not Going Out" ends with Lee's section of the title going out, courtesy of Barbara unplugging it.