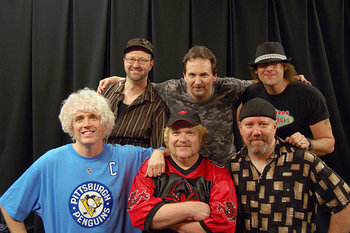 ApologetiX in 2009.
Established in 1992, ApologetiX is a Christian parody band from Pittsburgh, Pennsylvania who has gained a reputation for making Christian-themed parodies of popular music. The band's name is a play on its eponym apologetics – the defense of a religious doctrine, in this case referring to Christian apologetics. The band is currently composed of J. Jackson on vocals, Keith Haynie on bass guitar, Jimmy "Vegas" Tanner on drums, Bill Hubauer and Chris VonBartheld on keyboard, and Tom Milnes and Tom Tincha (a.k.a. "TNT"), both on lead guitar.
Advertisement:

One of their (part-time) drummers, namely Jon Schwartz, is best known for being the drummer and webmaster for fellow parody musician "Weird Al" Yankovic.