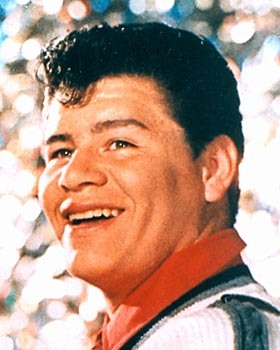 Richard Steven Valenzuela, best known as Ritchie Valens (May 13, 1941 – February 3, 1959) was an American Rock & Roll musician, best remembered as one of the three rock 'n' roll pioneers who, together with Buddy Holly and The Big Bopper, died in a tragic plane crash that has gone down in history as "The Day The Music Died", in reference to Don McLean's American Pie. Of all three musicians Valens was the youngest, being only seventeen years of age.

Valens is best known for his Signature Song "La Bamba". However, he is also known for the lesser famous hit "Donna". He was the first rockstar of Hispanic origin, paving the way for artists such as Carlos Santana, Chan Romero and Los Lobos.

Despite his premature death and not particularly large music catalogue Valens did manage to receive a Biopic based on his life: La Bamba (1987) and was inducted in the Rock & Roll Hall of Fame in 2001.