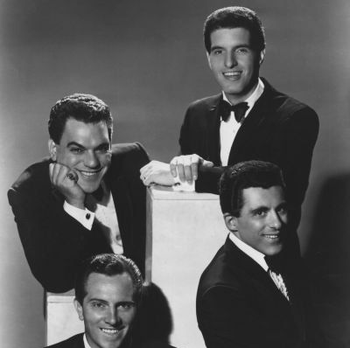 The classic New Jersey Italian-American rock band with countertenor Frankie Valli in the lead. His soaring falsetto helped provide the group's trademark sound, though later hits do not feature the falsetto. Odds are you've heard one of their songs on an oldies station, as they play in constant rotation. Some of their biggest hits (most of which were written by the songwriting collaboration of Bob Gaudio and Bob Crewe) include "Walk Like a Man", "Sherry", and "Big Girls Don't Cry". They were inducted into the Rock and Roll Hall of Fame in 1990.

Frankie Valli began his career in 1953 with his first single, "My Mother's Eyes". He then joined Nick DeVito, Tommy DeVito and Hank Majewski in a group first known as The Variety Trio, then as The Variatones, and finally as The Four Lovers when they got a recording contract with RCA Victor. Said contract led to a minor hit with "You're the Apple of My Eye" in 1956, but the next four singles and an LP failed to chart and RCA dropped them. A subsequent contract with Epic Records only lasted one non-charting single.

The group then met producer Bob Crewe in 1958, who signed them to a three-year contract which had them working as background vocalists and musicians on Crewe's productions, as well as recording individually or collectively under many names. Membership was fluid during that time, eventually settling by 1959 into the classic quartet of Frankie Valli, Tommy DeVito, Nick Massi and Bob Gaudio (formerly of The Royal Teens of "Short Shorts" fame).

After a failed audition at a bowling alley in 1960, the group figured they should gain something from that failure, so they took the name of the bowling alley — The Four Seasons. At the same time, in a handshake agreement, Valli and Gaudio formed The Four Seasons Partnership, which still exists to this day. This "new" group released their first single, "Bermuda", on Gone Records in 1961. It did not chart, and it looked like they would have to settle for background session work yet again, but then Bob Gaudio wrote "Sherry". That song went to #1 in 1962 and began the group's association with Vee-Jay Records, for which they would record several hits including their second and third #1s, "Big Girls Don't Cry" and "Walk Like a Man".

By mid-1963, Vee-Jay was struggling to pay the Four Seasons' royalties, which forced them to sue the label and jump over to Philips Records in 1964. Despite this, the hits kept coming: some of the Philips-era hits include "Dawn", "Rag Doll" and "Let's Hang On!". Nick Massi left the group in late 1965, replaced briefly by their arranger Charlie Calello, then by Joe Long. The group's popularity fell by the late 1960s due to changing musical tastes; the 1968 Concept Album Genuine Imitation Life Gazette, while ambitious, was a commercial failure and their contract with Philips ended in 1970.

The group signed with Motown in 1972 as part of the label's (ultimately unsuccessful) attempt to expand its reach to the West Coast. They released one album, Chameleon, on the subsidiary label MoWest, but the parent company didn't seem to have much faith in the band and gave it little promotion, causing it to flop. They recorded some songs for a second album, but Motown wasn't interested and instead they chose to release the band from their contract. Valli attempted to purchase the rights to the unreleased songs but in the end was only able to acquire the rights to one song, "My Eyes Adored You", which he paid $4,000 for. The song would be released by Private Stock Records as a Frankie Valli solo record and would hit #1 in early 1975. This success led to renewed interest in The Four Seasons, who signed with Warner (Bros.) Records that year. By that point, Tommy DeVito and Joe Long had left the group, and Bob Gaudio had quit performing (though he remained on board as a writer and producer). A new version of the band was assembled; Gerry Polci and Don Ciccone joined Valli as a Vocal Tag Team, while the musical backing would be provided by session musicians. This new lineup had hits like "Who Loves You", "December, 1963 (Oh, What a Night)" (yet another #1) and "Silver Star" but their popularity soon faded again. Valli, meanwhile, had a few solo hits such as "Swearin' to God" and "Grease".

Gaudio and Valli would team up for two more albums, 1985's Streetfighter and 1992's Hope + Glory, both recorded with a crew of studio musicians and released under the Four Seasons name. Neither sold particularly well, and the group has not released any new music since.

There is a movie of the same name, but it has nothing to do with this group. Nor does the Antonio Vivaldi work. The stage show and movie that does profile this group is Jersey Boys.