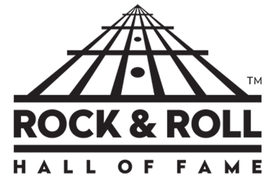 "Dream big and surround yourself with brilliance, even if you end up dressed up like a flower or a sexually transmitted disease."
—Peter Gabriel, during his induction speech.

Established in 1983 by Atlantic Records chairman Ahmet Ertegun, the Rock and Roll Hall of Fame is a museum dedicated to celebrating the artists/bands, producers, engineers, and other important figures that helped shape rock and roll as we know it. The museum has been located in Cleveland, Ohio since 1995. They have many exhibits, some permanent and some not. One notable feature is a list of the Songs That Shaped Rock and Roll, tracing songs from as far back as the 1800s to the present day that have had a significant impact on rock history.

Every year, the Hall inducts six to twelve bands and artists that have helped shape rock and roll. It has to have been at least twenty-five years since their first album for them to qualify. Their genres don't specifically have to be rock, per se: the Hall has inducted performers from the worlds of country, pop, reggae, disco, hip-hop, and R&B/soul over the years. Special awards are also given to non-performers, the Award for Musical Excellence (formerly the Sideman Award, so named for people best associated with performing with other bands and artists), and early influences (such as Robert Johnson and Billie Holiday, whose music is closely associated with the roots of rock and roll). The first group of inductees in 1986 included Elvis Presley, Little Richard, James Brown, The Everly Brothers, Ray Charles, Sam Cooke, Chuck Berry, Buddy Holly, and Jerry Lee Lewis. The ceremonies are famous for the final "Superjam," in which inductees, presenters, and special guests all perform a song or medley of songs together.

The Hall has not been safe from controversy. Many band members and artists (those who aren't already dead, anyway) have refused to attend the ceremony over the years. In one case, an entire band boycotted their induction (see their page's quote). Tensions often rise when band members who left the group (or the entire group, if they're reunited) have to speak with the other members (such as Blondie - geez, 2006 was an intense year for the Hall). The Hall has also been criticized for overlooking certain genres and subgenres - particularly metal, with Black Sabbath note  Inducted in 2006 and Metallica note  Inducted in 2009 currently being the only metal bands in the Hall. The Hall has also been accused of favoritism and sexism over the years.