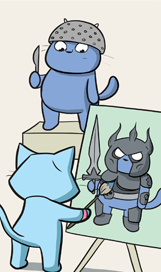 The canvas adds 10 pounds of awesome.
"See, Dad doesn't think the decompression would tear open a hole that big in such a small plane, but obviously Dr. McNinja lives in a world that operates like a Mortal Kombat stage."
— Chris Hastings, The Adventures of Dr. McNinja Ch 14, p 17

Creators are allowed to be inaccurate if the inaccuracy serves the story better than accuracy would.

In a nutshell, there are two forms of this trope. One, the writer is aware that some parts of the show are inaccurate. The history is wrong, or the science is off, or something else. It's easy to assume that the writer didn't bother with research. But they may well have. Often they know that what they are writing is off, and wrote it anyway. Sometimes, it's because it's the way it's always been done in show business, and, even if they themselves know the truth, the audience still wouldn't believe it otherwise. In some cases, the research couldn't be done because information was lacking, so the artist made an educated guess.

It's about putting the story first — after all, the most important thing in fiction is telling a good story. Besides, whoever first said "truth is stranger than fiction" didn't know what they were talking about.note It's actually part of a longer quote by Mark Twain; the full quote is, "Truth is stranger than fiction, but it is because fiction is obliged to stick to possibilities. Truth isn't." If some things have to be fudged for the sake of a good story, then they will be fudged. If things have to be sped up to stay interesting, they will be. These are changes to ensure Emotional Torque.

However, this is a double-edged sword. For the license to work, the story has to be good. A bad story will often look worse for its inaccuracies. This is where the second type comes in; the writers making the mistakes not on purpose for the sake of the story but simply getting their facts objectively wrong, which is a flaw in the story. There isn't a complete consensus, of course, about which stories are on the right or wrong side of Sturgeon's Law. Another major downside is that this trope is often used negatively in an Author Tract, usually to construct a Straw Character or deliver a straw argument in favor of, or against, something.

When reading about artistic license on a page, keep in mind that Tropes Are Tools. Someone listing an event of artistic license does not mean the work or use of this trope was bad. Pointing out artistic license is not bad-mouthing a work. If an entry seems especially snarky about it, You Could Always Edit It Yourself, making it a little less snarky.

Writers, be warned: Using too many of these or taking one to illogical extremes can tug at the audience's Willing Suspension of Disbelief.

See also Hollywood Style (which fits various forms of artistic license), Garnishing the Story (in that adding to the story is the primary reason for inclusion), The Power of Index (in which an element is much stronger than it would realistically be), and Rule of Index (where the license is from how cool/funny/scary/etc. something is).

Usually, these are Tropes Hidden from Audience.

The following tropes do not fit under any of the sub-categories: