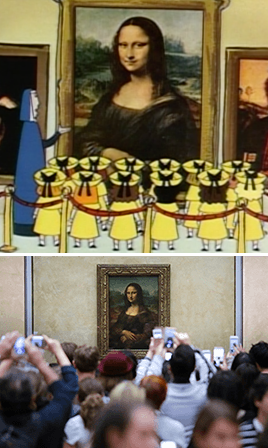 "Why is she smiling? I bet it's because of her size changing secret."
The world of art as portrayed in stories is often inaccurate. Since the needs of the story outweigh the need for accuracy and Tropes Are Tools, creators will often have their protagonist roll up a canvas Mona Lisa and carry it off in a tube, although Leonardo da Vinci painted it on a wood panel.
Advertisement:

The creator may or may not be aware of the artistic license being taken. There may be easy ways around the Plot Hole addressed through the artistic license or it could be practically impossible to tell the creator's story without this break from reality. The artwork can be a painting, a poem, a song, a building, an invention, or any other piece that would be called art. It includes taking liberties with how the world of art works, such as speeding up the time it take to appraise a piece, or how museums acquire artwork. It also includes distorting facts about the world of art and artworks.

Contrast with Artistic License – History. This is not a trope about anachronisms. Should a piece of artwork not exist in the time period of the story, such as Buddy Holly playing a 1965 Fender Stratocaster in 1959, history is the problem, not the artwork. Should Buddy be playing a banjo rather than his Stratocaster, the artwork has changed and fits this trope.

Contrast with Hollywood Density. Should Michelangelo's David be picked up by a crane or person(!) that couldn't possibly lift 6 tons, but is still 17 feet tall and looks the same as in real life, that's Hollywood Density. If it's presented as a 6-foot-tall statue it fits this trope.

Can be averted through Fictional Painting. The artwork or process must be presented as Real Life in order for the artistic license to be taken.

Songs performed wrong, poems misquoted, paintings painted on the wrong material, buildings such as the Eiffel Tower or Taj Mahal misrepresented, and museums behind elaborate plots to steal all of Van Gogh's paintings are all possible examples of this trope. The key is that the story references a facet of the world of art as if it is authentic and the depiction is different from reality in a meaningful way.