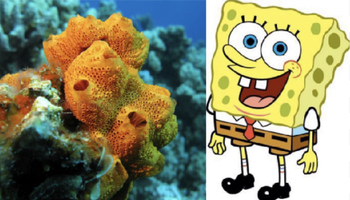 A real sea sponge, and an interpretation by a certified marine biologist.
Advertisement:

Similar to land creatures, it is not uncommon for sea creatures to be portrayed inaccurately. These errors could be any characteristics about aquatic life that is portrayed inaccurately including anatomical errors, behavioral errors, errors about their habitats, and errors regarding how they interact with other species. This trope does not apply to mythical marine creatures, such as sea monsters and mermaids.