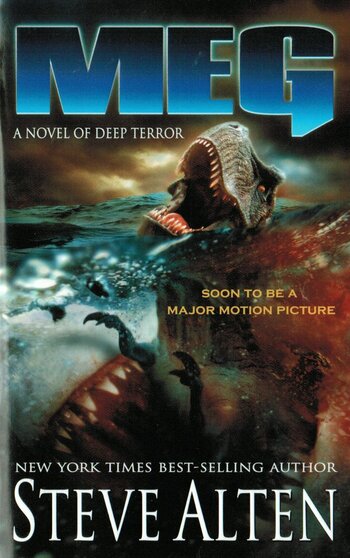 The flagship series of novels by Florida author Steve Alten — except the "flagship" is actually a really, really big Threatening Shark.

"Meg" is short for "Megalodon", the name of an actual giant prehistoric shark (although its size, strength, intelligence, and probably its ferocity are frequently exaggerated in the books; that, and it glows.). The books detail the adventures of Cmdr. Jonas Taylor (and later, his family), a former member of the Navy who came face to face with the shark while diving in the Mariana Trench, reacted about the way you might expect, and was drummed out of the Navy for allegedly going insane. Later, having become a marine biologist obsessed with proving he isn't crazy, Jonas ventures back into the trench, meets the shark again, and accidentally unleashes it. Terror, thrills, and more all ensue.

And we do mean ensue. These books delight in taking their narrative about humans going up against giant sharks everywhere and anywhere they can think of, no matter how crazy, unrealistic, or controversial it may be. Indiana Jones—caliber exploits by members of the human cast tend to be the result, with a Moment of Awesome or Funny Moment, or both, often capping it all off at the finale.

The series is also becoming notable as one of Steve Alten's outlets for issuing a Take That! against whomever he's mad at, and there seem to be a lot of them. The result may well qualify as Badass Decay for many readers, and although Steve Alten has improved as a writer tremendously since he wrote the first Meg book, the series has arguably declined in quality as Alten continues to supplement the series that everyone still associates with him.

And yet, the series at its peak is affable in its cheesiness to the point of being like an old B Movie—So Bad, It's Good, if you will, and there's just something about a man slaying a shark by letting himself be swallowed and then cutting up the shark's organs using one of its lost teeth or a shark attacking a baseball game, of all things that has the ability to put a smile on readers' faces, even as they shake their heads.

A film adaptation was in some truly memorable Development Hell since 1997 under the now defunct Hollywood Pictures. In the mid-2000s, New Line Cinema held the rights to the series with Jan de Bont (Of Speed fame) and Guillermo del Toro involved. Eli Roth later came onto the project, but it fell through. Principal photography finally began in October 2016, with Jon Turteltaub as director and Warner Bros. scheduled to release the film in March 2018, before being bumped back to eventually airing in August 2018.

The initially unrelated The Loch features another scientist, Zachary Wallace, whose career is nearly destroyed when an expedition to the Sargasso Sea to find a giant squid leads to disaster. Months later, Dr. Wallace, suffering from a crippling fear of the water, is forced to return to his native Scotland in order to support his father, who is on trial for murder and claims the Loch Ness Monster was the real killer. This forces Zach into confronting his own inner demons and, after tracking it down, Nessie itself. The book's sequel brings characters from both Meg and The Loch together, Canon Welding the two series.Also initially unrelated, Sharkman was made a part of the series when scientist Barbara Becker was mentioned in Meg: Night Stalkers. It features Kwan Wilson, a promising young athlete paralyzed by a car accident, who takes an internship under Dr. Barbara Becker, a scientist working to create cures for cancer and paralysis using shark stem cells. Stealing a supply of the cells for himself, Kwan gives himself the paralysis cure in an attempt to repair his damaged spine. Unfortunately, while it does heal him, it also causes Kwan to develop a triggerable mutation into a humanoid shark-like being, resulting in Dr. Becker's backers trying to use him for their own purposes.

The Meg series contains examples of:

The Loch books contain examples of: