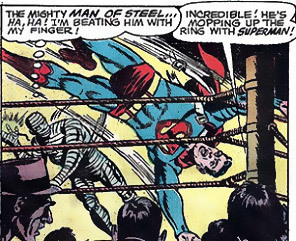 This new villain must be tough; he's defeating Superman!
"He's the guy who's here to act tough so new characters can wreck him when they're introduced thus proving to the rest of us how amazing they are! Like Wolverine or Worf."
— Red Mage, 8-Bit Theater
Advertisement:

Want a quick way to show how dangerous one of your unknown characters is? Simple, make them do well or win in a fight with a character that the audience already knows is tough. This establishes them as willing to fight and marks them as sufficiently dangerous.

For new villains, it's common for them to pick up the toughest character among the heroes (usually The Big Guy) and hurl them across the room or otherwise take them out in one blow, thus showing that they are the real deal. It's even a genuinely good strategy — take out the biggest and toughest in a group, and the rest will accept how tough you are instead of having to prove it over and over. When used sparingly and appropriately, this is a powerful way to establish said villain as a serious and credible threat, leaving the audience thinking, "Wow, they just beat up Worf! They must be bad news!" But if the same character is repeatedly used as the target of displays like these, then the character begins to look weak, and if abused, their reputation as the "biggest, toughest" etc. begins to look more like an Informed Ability than anything else.

Worf Had the Flu is sometimes used to justify Worf's poor showing. The Worf Barrage is when an "ultimate" attack or technique is defeated this way instead of a character. If a new villain introduces themselves by beating the previous villain, that's Make Way for the New Villains (a subtrope). If this happens to a major villain following a Heel–Face Turn on their part, that's a Redemption Demotion. When Worf gets beaten emotionally rather than physically, that's Break the Badass. Applied to an entire military? You may get a Red Shirt Army. If the defeated badass is a Professional Killer, that's Assassin Outclassin'. If the defeated badass is a tank or similar armored vehicle, that'll be Tanks for Nothing.

Compare Badass in Distress and The World's Expert on Getting Killed, both of which can overlap. Killing off a Red Shirt or two is a slightly different method for achieving a similar effect. If the character beats up a whole army, Conservation of Ninjutsu is probably at work. Hopeless Boss Fight, when the Worf Effect is shown in a form of Boss Battle. Contrast Fight Dracula, in which a writer has a pre-established character (as opposed to a new one) demonstrate their awesomeness by fighting Dracula (but not necessarily winning). See also the analysis page for some side analysis of this trope. Also see Horrifying the Horror when a monster is scared by an even worse monster.

Named for the tendency in Star Trek: The Next Generation for hostile creatures to do that very thing to Worf. Also known in Professional Wrestling as "jobbing".

Note: Please don't add an example of this trope whenever someone loses a fight. It only applies if it serves the purpose described above.

Morpho Knight is a valkyrie-like warrior who delivers the souls of the powerful to the afterlife. It demonstrates this power by popping into a postgame boss via a butterfly form whenever it so pleases and absorbs the boss's power and form, turning into a winged knight and fighting the player instead.

Morpho Knight is a valkyrie-like warrior who delivers the souls of the powerful to the afterlife. It demonstrates this power by popping into a postgame boss via a butterfly form whenever it so pleases and absorbs the boss's power and form, turning into a winged knight and fighting the player instead.