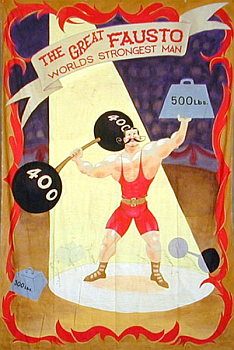 "You can't beat me with strength.
Speed can't beat me.
You're gonna find out, you, just, can't, beat, me... period!
I am the world's strongest man! You better be worried about surviving through the night."
— Mark Henry
Advertisement:

The World's Strongest Man is a character who is, well — the strongest man in the world or universe, or, at the very least the strongest human. He may be brainy or stupid (sometimes he Does Not Know His Own Strength), attractive or ugly (or neither), but one thing is for sure — you don't want to mess with him, as he will most definitely wipe the floor with you. He may be going on The Hero's Journey, or he may just be full of himself and his power. If he's a villain, he's often either the Big Bad or The Dragon.

This trope may be played with by Samus Is a Girl or Fake Ultimate Hero. See also Super Strength and The Strongman. Note that this trope refers to a character type, determining just who is the strongest leads to arguments about Character Tiers.

Almost certainly has at least The Strength of Ten Men. Likely to be seen with clowns, contortionists, Circus Brats and Girls With Mustaches. Often billed side-by-side with The Freakshow. May overlap with World's Best Warrior, although "best warrior" doesn't necessarily mean "strongest." World's Most Beautiful Woman might be an arguable Distaff Counterpart, because Men Are Strong, Women Are Pretty. World's Smartest Man is the intellectual counterpart. See also The Greatest Style, for a fighting or competition method which is better than all the others.

Sub-Trope of "World's Best" Character, for being that, but only for pure strength.

Franchises with their own pages