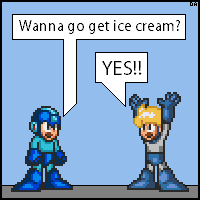 is quite possibly the most influential Sprite Comic of all time. It stands on three pillars: No Fourth Wall, Mega Man, and stupidity. Originally, it was intended to just be filler for a hand-drawn comic the author was making, but the idiotic adventures of Mega Man and friends proved more popular, and the title characters were incorporated into the author's skewed vision of the Megaverse.

The bulk of the comic can be boiled down to a basic format; once a year, there would be a parodic retelling of one of the 8-bit Mega Man games, and once a year, a villain would show up and try to kill everyone. Filling the gaps are a mind-boggling amount of Time Travel, Alternate Universes, stupid antics, meta-interactions with the comic's author, and, of course, the titular Bob and George, two brothers who were a supervillain and superhero respectively before getting warped into the Mega Man Universe.

Ran daily (mostly) from April 2000 to July 2007, making, codifying, abusing, lampshading, and generally making tropes into all sorts of funny shapes throughout its once-a-day, seven-year run.

It was also known for hosting many sub-comics, of which only MS Paint Masterpieces is still known to update. Sometimes.